Since new developments are the products of a creative mind, we must therefore stimulate and encourage that type of mind in every way possible. –George Washington Carver

I was chosen. Yes. Me. I was chosen. I was chosen to join 36 other educators to go to the mountaintop.  That mountaintop was located on the 9th floor of a nondescript building at 25 Massachusetts Avenue in Washington, D.C.  I had already received an email message telling me that I would be part of the #WDC17 Google Innovator Cohort in June, but to be sitting in a room with the very same people who received the very same congratulatory email message was inspiring.  As a matter of fact, to hear, “We chose you.” from the people in charge of the program sent chills up my spine the very day they said it and still does today.

I am going to digress for a moment. I have mentioned before, I am a middle child. I don’t know how any other middle child feels, but this one feels like there is absolutely nothing special about being the middle child. I wasn’t the first, and I wasn’t the last. I don’t have children, and they each have a son and a daughter.  My grades were better than that of my brother and sister. I graduated from college before both of them and received my Master’s degree before they did, yet I have never felt special. I didn’t feel special the year I was selected Teacher of the Year in 2010 at the school I worked at which also happened to be my alma mater. I think it didn’t help that the principal said that from that point on, meaning after I was TOTY, it would mean something to be Teacher of the Year. It would no longer be a popularity contest, but a testament to the contributions the teacher made to the overall educational setting of the school. Wow? Really? However, for that moment in that room at the Washington, D.C. Google Office, I felt special. I was chosen out of the millions of people who applied (yes, slight exaggerations). Me. Leslie Renee Fagin was chosen to be part of a program that no doubt is going to stretch and push me more than any other thing in my professional career. That’s okay. I am up to the challenge. I hope. I do have some doubts from time to time about how I am going to turn a fully functioning school bus into a mobile STEM or STEAM lab, I am not quite sure, but I do know that I have a support group that stretches across the United States and Canada. For the three days that we were at Google, we talked, laughed, and grew together as a group. We shared our projects, our passions, our challenges, and offered solutions to one another. We shared resources and contacts and just the right amount of constructive criticism needed to keep us going in the right direction.  Now that we are back at home and knee-deep in another school year, we will work on our projects, our day jobs, our hobbies, and our families. We will send messages in our Google Hangout Chat,and we will follow each other via social media. We are a tribe. We are #WDC17. #WeAreInnovators.

This is one of the things I worked on while at the Google Innovator Academy. I laid out plans for what needed to be done, created a prototype, conducted research about my end-user, and received feedback from my fellow Innovators.

Now, back to the experience of being at Google DC. I don’t know if that’s the official name of it or not, but that’s what I am calling it. I used to be an English teacher, so I often take liberties with making up words and names. We had a tour of the Capitol prior to the first session at the Google office. It was my intention to participate, but after sitting on a plane for nearly two hours and trekking across the city to get lunch and then head to the Capitol,  my feet just didn’t cooperate. In 2008, I fell down the Spanish Steps in Rome, Italy and tore my Achilles Tendon. It hasn’t been right since. My first day in DC was painful so I opted to skip the tour and have a fan girl moment with one of our coaches. When we were sent our initial congratulatory letter with Academy details, we were told who the coaches would be. I was impressed with all of them, but secretly I wanted Jennie Magiera to be my coach. I knew I would be good with any of the coaches, but I have been a HUGE fan of Jennie’s since ISTE 2014. As referenced in an earlier post, I was hired for my current position about two weeks before ISTE 2014. I had no idea what to expect, but I was excited to see that Ashley Judd was going to be the opening keynote on Sunday night. She was good. Jennie Magiera was BETTER. Ashley was a celebrity who was talking to educators about relevant matters. Jennie was/is an educator talking to educators about the lives we lead and the lives we touch. Jennie is in the trenches every single day just like we are. She understands because our lives are similar.  I was so pumped by what she had to say. I knew that at some point in my life I had to meet her. I never imagined that I would be fortunate enough to meet her and have her be my coach during the Google Innovator Academy.  Jennie’s voice was the first I heard at my very first ISTE, and I have not forgotten what she said or how empowered I felt as a brand new instructional technology coach. After spending three days with her and having the opportunity to share my vision with her and get feedback, I remember why I felt so empowered. She is amazing. If by chance the other coaches are reading this, please don’t think that I think you aren’t amazing. You are. I have learned so much from all of you and am thankful for the time spent with each of you. But I think you get it. Jennie was my coach, and I spent most of my time learning from her. She was sympathetic and accommodating when I had issues arise with my foster son and a certain unnamed state child welfare agency, and she was gracious enough to take pictures with me so I could send them home to my foster son. I would like to believe that by placing us in groups with similar project themes, the Innovator program people in charge meant for the people in the groups to connect on a deeper level. The #RebelRousers did just that.  We are forever connected by the times we spent sitting at our table sharing our life experiences, our hopes, our fears, and our visions on how to change education and leave a lasting legacy.

My people. My tribe. My #RebelRousers with our amazing coach Jennie!

Yes, I was chosen. Yes, although I still struggle with the thought, I am special. Regardless of what anyone else thinks or says about me, I am special. Not because I was chosen to go to the Google Innovator Academy. I am special because of who I am, what I have done,  and what I will do. What will my legacy be? At this point in time, I have no idea. I do know that I have worked with children all of my adult life. I probably reached some of them and made a difference in their lives. I am currently working with adults. I know that some appreciate the help I provide with their technology needs. That may be part of my legacy. I have loved my family and friends, and most of the time, they know that. The love and dedication I have for my family will be part of my legacy. My Google Innovator Academy #WDC17 project will most definitely be part of my legacy.

I am still contemplating a name for the project though I know my mother’s name will be tied in somehow. My mother was a para-professional in our district for 15 years before a terminal cancer diagnosis cut short her career. She loved the children she worked with and spent way more time than she got paid for creating opportunities for them – all of them. Especially the ones who needed just a little extra love and attention. When my STEM/STEAM bus is riding around town, I want her name to be visible as part of her legacy. This bus will be for the children in our community – all of them. All of our children have dreams, and we have an obligation to give them a forum to nurture those dreams as well as the opportunity to create, collaborate, critically think, and communicate. This bus will be for the teachers in our district. They crave more although sometimes they are too tired to do more.  Guess what? They do more anyway because that’s what teachers do. They want to give our students every opportunity for success, and they want to be prepared in every way to help them. The bus will also be used for professional development so that our teachers are equipped to help the students. The bus will be for my mother because this is just the kind of thing she would have wanted. She grew up extremely poor and never had anyone to encourage her to think about a better life. Thankfully she married my father, a career Army soldier, so she got a better life. She never forgot where she came from and spent her life-giving back. Lastly, this bus will be for me. I was chosen. I am special. I want to leave a lasting legacy for the children in my community. It’s my community because this is where we moved after my dad retired from the Army. It’s my community because I was educated for the last five years of my school career. It’s my community because this is where I live and work. It’s my community because this is where I choose to make a difference. Every time I go into a school and look at our students, I see so many possibilities. Every night when I put my foster son to bed and we have our nightly chats, I see so many possibilities.  Those possibilities will become a reality as I work through the process of re-purposing the bus and turn my dream into a reality. The work began before I got to the Innovator Academy. I dug a little deeper while in Washington, D. C. It’s time to get to work and get this bus in motion.

I was chosen. I am special. I am preparing my legacy.  That’s what happened when Ms. Fagin Went to Washington. She found herself. 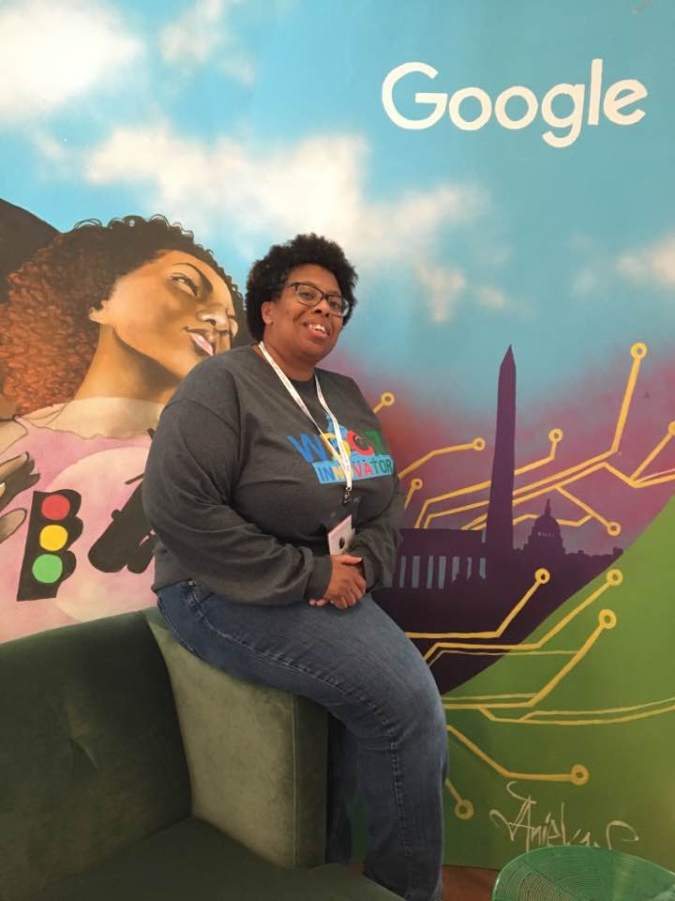 The possibilities are endless. I was chosen. I am special. I found myself.

#GoogleEI #WDC17 Some of the most amazing educators I have had the pleasure to work with and learn from.

One thought on “Ms. Fagin Went to Washington, Part II”

Diary of a Not So Mad Instructional Tech Coach by Leslie R. Fagin is licensed under a Creative Commons Attribution-NonCommercial-ShareAlike 4.0 International License.
Permissions beyond the scope of this license may be available at leslie.fagin@gscs.org.
Loading Comments...
%d bloggers like this: